In this digital era, global media originating from a foreign country can easily reach a huge population within a fraction of a moment. The way K-pop music has spreaded universally, collecting a multicultural fandom with its rising popularity, stands as the greatest example.

K-pop has elevated the culture, beauty, talent, and fashion of South Korea by placing them on the world stage. Their music has connected people from different corners of the globe.

K-pop music definitely deserves a lively discussion for its worldwide success. In this article, we are going to focus our discussion on two notable K-pop music bands – BTS and Big Bang. If you are new to this genre of music or if you want to know more about the K-pop industry, this article will make you end up exploring a lot about it. 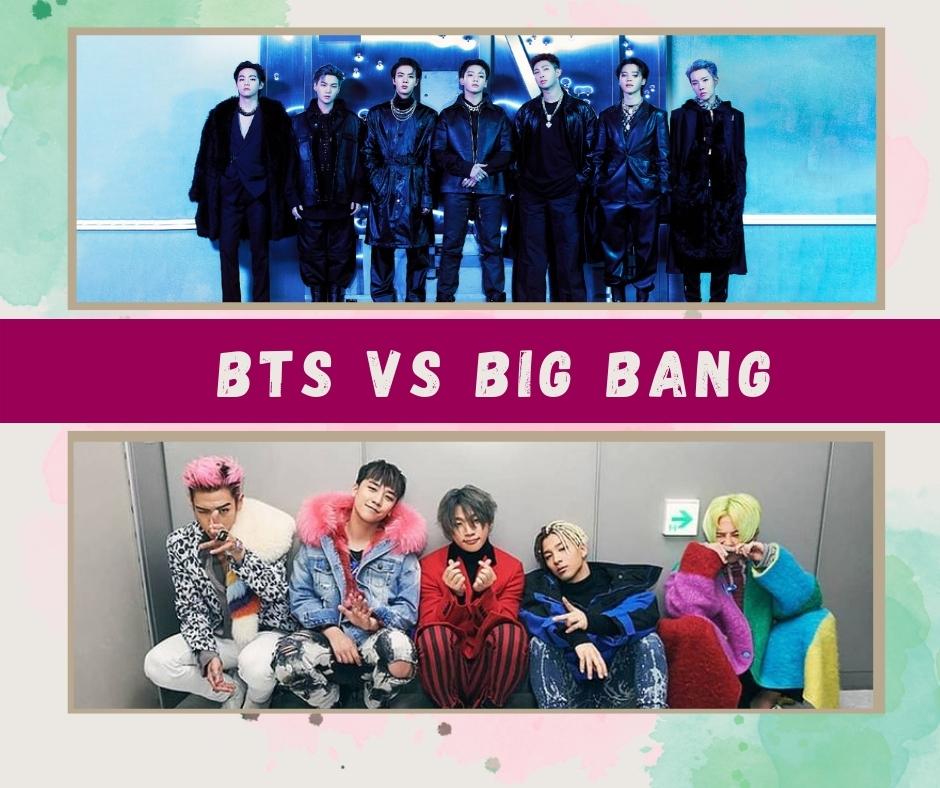 BTS is the most popular K-pop band. There are seven BTS members in total. They are Kim Namjoon known as Rap Monster, Min Yoongi known as Suva, Park Jimin known as Jimin, Jeon Jeongguk known as Jungkook, Kim Taehyung known as V, Kim Seokjin known as Jin, and Jung Hoseok known as J-Hope.

The group debuted under a small company named Big Hit Entertainment in 2013 with the album, 2 Cool 4 Skool.

Their motto has greatly influenced people’s lives. They say –

” Please don’t be afraid, don’t worry yourself. The end and beginning, beginning and end are connected.”

Now, let’s see what’s so special about the South Korean boy band called Big Bang. The group is composed of only four members: T.O.P, Taeyang, G- Dragon, and Daesung. Initially, it was a five-member group including Seungri who took his retirement from the K-pop industry in 2019.

Their phenomenal acts, self-production, and remarkable musical experimentation have spreaded the Korean Wave all across the world.

Here’s a table charted below from which we can compare BTS and Big Bang from different angles. We will find that both the groups have done really well in the K-pop industry and have given a very tough competition to the other K-pop bands.

Yet, this article would aim to decide who’s better – BTS or Big Bang. So, let’s get started with this contest and check out which K-pop band ultimately wins the tussle.

From this table, we can find out the various factors in which a particular K-pop group surpasses the other one.

Though both BTS and Big Bang are tremendously hard working and skillful in exercising and exhibiting their talents and have reached heights of popularity and success, if we have to decide who is more popular and successful, it has to be undoubtedly BTS.

BTS proves to be better than Big Bang in several ways. To be well informed about these two K-pop groups and to know more about this amusing comparison between BTS and Big Bang, continue to read below.

Who is more popular, BTS or Big Bang?

BTS outshines Big Bang by garnering more popularity. BTS is more popular than Big Bang in the West or the US. BTS has been able to establish a greater fandom because it has received universal recognition and appreciation.

However, it is Big Bang who happens to be more popular than BTS in Asia or in Korea. Perhaps no other K-pop group can reach the level of popularity that both these groups have accomplished.

BTS members are becoming more popular by crossing barriers, doing social services,and caring about the well being of fans. Despite achieving huge prosperity, they lead a simple life which has attracted people towards them.

Which K-pop group is better in terms of overall performance, BTS or Big Bang?

In terms of overall performance, the majority of K-pop enthusiasts often vote for BTS. BTS is outstanding when it comes to their stage presence, dance performance, singing and rapping with pleasing personalities, fashionable looks, and jaw-dropping visuals.

Their music videos can keep our eyes glued to the screen till they end up and their lyrics are so impactful that they keep ringing in our minds in loop.

However, Big Bang is known to be more laudable for their vocals than BTS. Taeyang and Daesung are better singers than BTS’s Jimin. Jimin himself admits that Taeyang is his role model.

While BTS gives a variety of hype songs, Big Bang gives a variety of melodious songs. Moreover, G Dragon and Taeyang among Big Bang are better in their solo careers than Suga, Jungkook or J-Hope among BTS. So, there are some people who would prefer Big Bang over BTS.

Which K-pop band is more successful, BTS or Big Bang?

When it comes to achieving success, it is BTS who grabs the glory over Big Bang or any other K-pop group. Today, BTS has the maximum number of followers on social media. They have been nominated and awarded several times.

They have made the maximum album sales. No other K-pop group has been able to reach the net worth of BTS. Big Bang needs to work harder to embellish their skills and build a stronger fan base to touch the level of BTS.

Who is the ultimate winner, BTS or Big Bang?

When we talk of ultimate victory by considering all the factors, BTS is the one to be crowned with success.

Big Bang is definitely great but BTS has climbed way above it.

BTS has kept striving to maintain its utmost position in the K-pop industry. Unlike Big Bang, BTS is getting both national as well as international attention, love, and respect.

After having read this article, you must have understood which is the best K-Pop group. As of 2022, undoubtedly, it is BTS who occupies the best position leaving behind not just Big Bang but all the other K-pop groups.

However, it shouldn’t be forgotten that Big Bang is the first K-pop group to sing their self-composed songs. Their performance can never fail to hype up the stage. Big Bang was the first band to invent light sticks. It was one of the first bands to contribute in spreading K-pop to an international level.

Since 2006, Big Bang has paved the way and influenced several K-pop idols that came up in the following generations, including BTS. It is true that today BTS has surpassed Big Bang but Big Bang would forever be regarded as a legendary group that immensely contributed in shaping K-pop into what it is today.