K-Pop, or Korean popular music, is a famous genre of musical composition that took its origin from South Korea. K-Pop music is influenced and hybridized by hip-hop, jazz, soul, rock, rapping, and electronic dance.

It showcases intensive live performances by a group of artists possessing media training, choreographing and vocal skills, and unique and attractive sense of fashion. Today,  the various K-pop groups have become global musical and cultural sensations and have garnered immense popularity and love among fans of the younger generation all across the world.

Among all the well-known K-pop groups, such as, Girls’ Generation, Psy, Exo, Stray Kids, Wonder Girls, etc, the groups that have grabbed major attention of fans and have achieved massive success, breaking several records, are, BTS and Blackpink.

In this article, we are going to compare BTS and Blackpink and find out which group is more popular and successful. If you are a music lover, you will definitely find this comparison to be an engaging discussion. 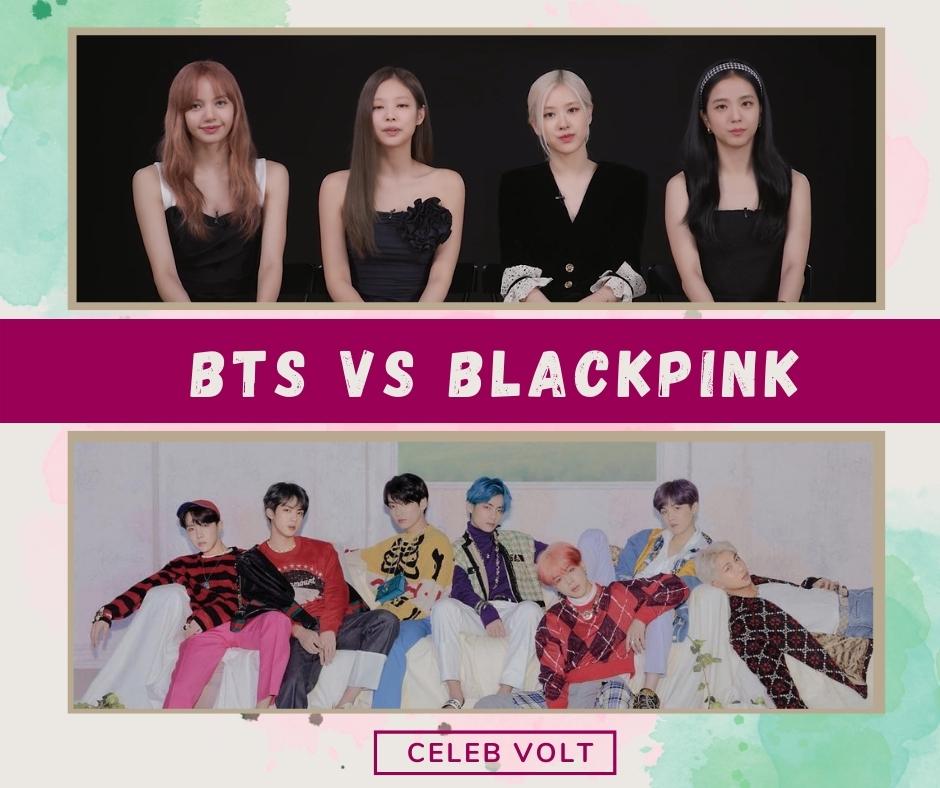 The popular K-pop group, BTS, consists of seven young South Korean boys. They released their first album, “2 Cool 4 Skool”, on 12 th June, 2013, under Big Hit Entertainment. Since then, they have gradually started rising to global stardom.

Though they began as a hip-hop band, over the years, they have remarkably evolved, inculcating various genres.

Their lyrics have shown concern regarding issues from mental health, internal turmoils of youth, hindrances in finding self-love to a wide range of socio-political issues. The themes of their songs have often touched on psychological aspects of an individual, philosophy, and literature,  unlike the rest of the K-pop songs.

On the contrary, to BTS, Blackpink consists of four South Korean girls. Blackpink’s music has ingrained elements of hip hop. They have also been marked to inculcate other genres like Arabic music, rock, R & B, and rock.

The group, formed by YG Entertainment, stepped into the K-pop industry in 2016 with their album, “Square one”, featuring “Boombayah” and “Whistle”. Within a short span, Blackpink has become the most successful Korean musical group of girls. In fact, they have received the recognition of the “biggest K-pop girl band on the planet”.

Now that you have got the basic points of comparison between BTS and Blackpink, let us take a look at the following table in order to get a precise and clear idea about it.

The table shows how both the K-pop groups, BTS as well as Blackpink, have achieved worldwide popularity. Yet, if we try to compare these two groups, we must admit that Blackpink has not been able to surpass the achievements and popularity of BTS. To know more regarding this, continue reading below.

Who is more popular, Blackpink or BTS?

When it comes to popularity, the weight is heavier on the side of BTS. There are several reasons behind BTS garnering more fame and success than Blackpink.

Blackpink has come with the silver spoon. But, BTS didn’t have the support of such a strong background. Today, whatever they have achieved is because of their music, meaningful lyrics, talent, struggle, resilience, personality, unity, and their beautiful hearts.

Who has better music composition, Blackpink or BTS?

If we have to make a decision on who has better music composition between BTS and Blackpink, it has to be undoubtedly BTS.

After launching their ‘Love Myself’ campaign, they began taking responsibility of listening to stories of their fans – how the positive messages that they have spread through their songs, have helped fans to overcome their hard times, and have taught them to embrace all their merits and flaws and love themselves as they are. Their songs have inspired people to lead a better life.

Why do people prefer BTS over Blackpink?

People prefer BTS over Blackpink and cast maximum votes for BTS. Each member of BTS has today become a multi-millionaire. Still, they didn’t choose to lead the luxurious lifestyle of a celebrity.

Rather, they have chosen to remain ordinary and close to the ground. They haven’t forgotten from where they came. They have kept in mind that whatever they are today, is due to the team’s efforts and the love and support of their fans.

BTS have used their stardom and fame for the betterment of people. They have made many donations, but never flaunted about their good deeds or advertised about them on social media. They remain humble even behind the cameras or while interacting with their fans.

Who is more successful, Black Pink or BTS?

BTS beats Blackpink in terms of achieving overall success. Despite the high level of competition in the K-pop industry, BTS has managed to stand at the apex of achieving worldwide success.

Yet, they have never taken their success for granted. They don’t let fame define them. Rather, they want their blood, sweat, and tears to find resonance and recognition among ordinary people.

Gradually, BTS has spread its wings all over the global music market, breaking multiple records. Today, BTS has become a part of history by being the best-selling musical group in South Korea and has also won the prestigious Billboard awards.

Undoubtedly, BTS shines unparalleled when compared with Blackpink or any other k-pop musical groups.

Is Blackpink or BTS better?

Definitely, BTS is better than Blackpink, though Blankpink has surpassed in recent youtube views. To gain popularity, Blackpink debuted in the US. Whereas, BTS never debuted in the US and yet, have been able to achieve utmost fame and respect.

While, in the K- pop industry, Blackpink has several rivals, BTS has none. BTS has a stronger family and unity than Blackpink. BTS members have far more success, awards, album and ticket sales, fandom, streams, YouTube subscribers and followers all over the world.

Who wins, Blackpink or BTS?

Of course, BTS wins over Blackpink. What sets BTS apart from Blackpink or any other K-pop groups, is their caliber to address important social issues which other groups don’t even dare to touch.

Blackpink has composed songs on girl crush, love and relationships. Its BTS group which has merely not composed its music for amusement among fans, but for making a difference in the world by bringing changes from within.

Thus, we may conclude that, it’s true that there’s no way to deny that both Blackpink, as well as BTS, are tremendously popular and hard-working in the K-pop industry and both have incredibly made their marks on the Western music market.

But, when they are scrutinized for comparison, Blackpink is far behind  BTS and has to do more in the future to reach the level of BTS.