Today, in the 21st century, K-pop has been a term trending on different social media platforms. It’s a new musical form, originating in South Korea. You must have heard of it and the different bands practicing this form of music.

If you want to know more about South Korean music or the most popular K-pop musical groups, you will surely find this article interesting.

In this article, we will be engaging in a discussion to find which K-pop is better – BTS or EXO. So, let’s get into it and find out who wins the battle. 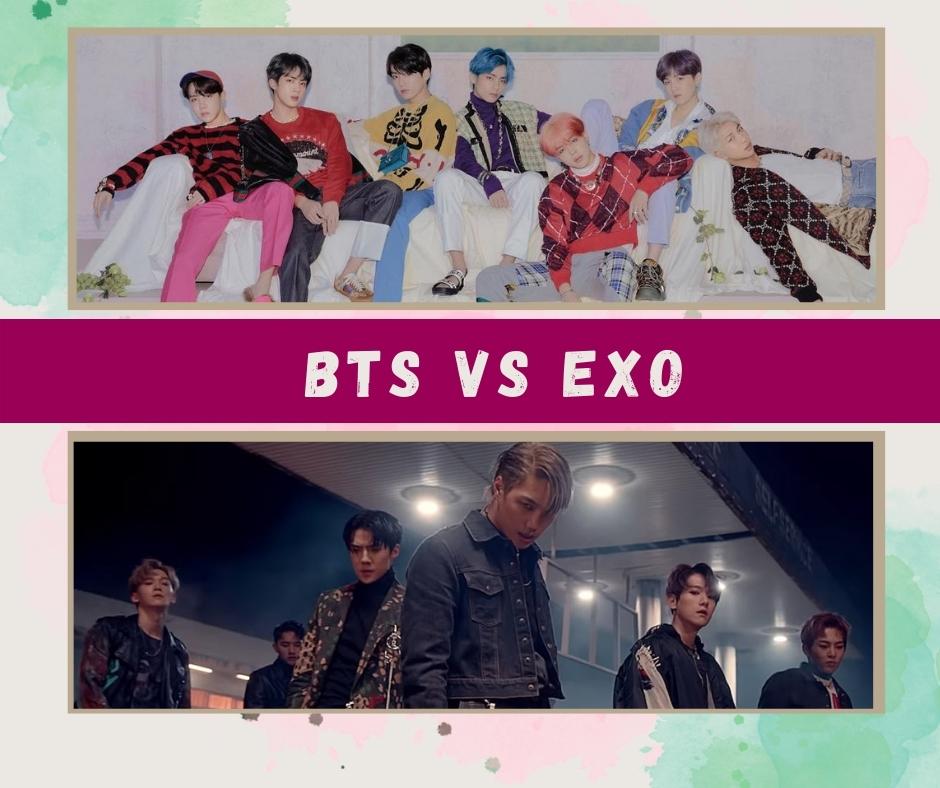 BTS is a musical band consisting of seven members. They brought their waves into the K- pop industry in 2010 and 2011 through their selection by Bit Hit Entertainment and got their auditions finalized in 2012. In 2013, they made their debut with their famous music album, 2 Cool 4 SKool.

Within a short span, this group stole the hearts of their fans and has become one of the biggest musical sensations of South Korea.

BTS won several awards, went for three world tours, launched five EPs and four studio albums in two different languages – Korean and Japanese. In 2017, their Billboard Awards win for Top Social Artist, has paved the way for them to get into the US.

Today, BTS members have gained countless fans and followers at a global level and have greatly influenced and inspired their lives through the positive messages they have tried to disperse all across the world to make this world a better place to live in.

Contrarily, EXO is another well-known K-Pop band, consisting of nine members. With their first music album, Mama, the group debuted under SM Entertainment in 2012.

The first official sub-unit EXO-CBX made their debut in 2016 with the ground-breaking album, Hey Mama!.

Their next official sub-unit, named EXO- SC debuted in 2019 with their album, What a Life.

As of 2022, EXO has become one of the most successful K-pop bands and has gained millions of fans from every corner of the world.

Now, we are going to decide which group is better, BTS or EXO, by taking several factors into consideration while comparing these two popular K-pop bands. Let us take a look at the table charted below to get hold of several parameters that can help us to determine which band is better.

This table clearly depicts that both BTS and EXO have garnered huge prosperity, fame, and achievements over years. They both are unique and attractive in their own ways. Both the bands have certain stronger as well as weaker factors on their respective sides.

However, by comparing both groups, we can come to the conclusion that it is BTS who is better than EXO.

To go in depth of this interesting discussion and to know more about these two worldwide renowned K-pop boy bands with highly laudable talents of vocal and choreography skills, carry on to read below.

Who is more popular, BTS or EXO?

BTS is more popular than EXO and multiple reasons can be enlisted in support of that. People interested in K-pop suggest that EXO appears more charming on the local stage in South Korea.

Whereas, BTS has gained universal acknowledgment and acceptance. Their assemblance is more popular at an international level. For instance, their concerts in the US and in Europe, generally get sold out rampantly.

Despite being great celebrities, they don’t lead the stereotyped lifestyle of rich people. Rather, being down to earth, they have remembered where they came from, how they have struggled to reach where they are today.

They are using their stardom to improve the world. They have made several donations and have associated with UNICEF’s #END violence program.

Which K-pop band is better looking, BTS or EXO?

Both BTS, as well as EXO, have different standards of being handsome and visually attractive with their own catchy styles and appealing appearance.

However, many K-pop enthusiasts admit that in terms of visuals, EXO members are better than BTS members as EXO hardly has any visual hole. EXO members are very natural, fun-loving, and kind-hearted.

There are also comments on BTS members having better personalities. So, judging them on the basis of this factor is subjective.

Who has better music and lyrics, BTS or EXO?

When it comes to musical composition, it is BTS who grabs the glory over EXO. No one can stand parallel to BTS in lyrics composition.

Their lyrics deal with the anxiety of youth, the ability to embrace all merits and flaws and questing for self-love, and social and political issues that other K-pop groups haven’t dared to touch upon. They have incorporated philosophy, literature, and psychological issues in their songs.

EXO has often been criticized for not writing their own lyrics and for only singing of love. On the other hand,in BTS, RM is immensely praised for rapping and writing songs for his own team.

Now, our tastes of voice and music would differ from one another. So, it’s again a matter of subjective preference while choosing the best.

Who is more successful, BTS or EXO?

Again, BTS beats EXO by being more successful. The BTS band has been crowned with several prestigious awards as well as nominations, both in Korea and the US.

BTS have been honored at different ceremonies with 535 nominations out of which they won 361 times. They have received American Music awards, Billboard Music awards, MTV Video Music awards, etc.

On the contrary, EXO members mostly received awards on the Asian stage. They have been nominated 286 times and have achieved a total of 168 victories.

Is BTS or EXO better?

If we have to make an overall judgment, we must admit that BTS is definitely better than EXO. Both the groups have one of the best dancers of the entire K-pop industry, namely, Kai from EXO and J-Hope from BTS.

Yet, in general, BTS outshines EXO when we take their choreographies into consideration. BTS have received more awards and in this respect, they are far ahead than not only EXO but all the other K-pop groups.

The weight is again heavier on BTS’s side if we calculate the album Sales. With 6,025, 853 sold albums, BTS stood at the apex of the album Sales chart released by Gaon Music in 2019. While EXO could secure the fourth position as they ended up selling only 829,668 albums.

Who is the ultimate winner, BTS or EXO?

Considering all the factors discussed above, we may declare BTS as the ultimate winner, leaving behind not just EXO but all the other fellow K-pop bands.

Their victory is framed by several remarkable factors, such as, their personalities, attitude towards fans, impactful lyrics, incredible charisma, struggle and resilience, and unity.

Nevertheless, there’s a big debate among fans regarding which group is richer. The net worth of Exo is approximately $ 1 billion, which makes it the wealthiest group. With a massive difference, BTS has only a net worth of $ 100 million.

Actually, EXO hails from a greater company, SM. Unlike EXO, BTS comes from a smaller company and they had to pay their trainee debts before they could start making profit and spreading worldwide with flying colors. Despite all the shortcomings, today BTS has become the best band in the K-pop industry.

Undoubtedly, BTS, as well as EXO, are versatile K-pop groups. Both have a huge fanbase admiring their talents, distinct music and achievements all over the world. Yet, BTS wins the maximum votes if we have to make an overall analysis and judge which band has the prevalence over the other.