The term ‘K-pop’ simply refers to Korean Pop. If you are exposed to the world of K-pop, you must be knowing that it’s just not about songs but actually is an entire package of having lots of factors for gaining love and popularity.

Those factors include the artists of K-pop bands having media training, talents in singing as well as dancing with good coordination, rapping skills, composition of lyrics, good looks and personality, fashion sense, and a whole lot of other entertainment factors.

Today, the various K-pop groups have stretched their wings with flying colors in every corner of the world.

The growing craze among the audiences for their music and performance have also helped the South-Korean culture, K-dramas, and the standards of K-beauty and Korean fashion to find world-wide recognition.

In this article, we are going to discuss two of the most well-known K-pop bands- BTS and Stray Kids. We will try to find out which group is better, BTS or Stray Kids, by comparing them on the basis of various factors. 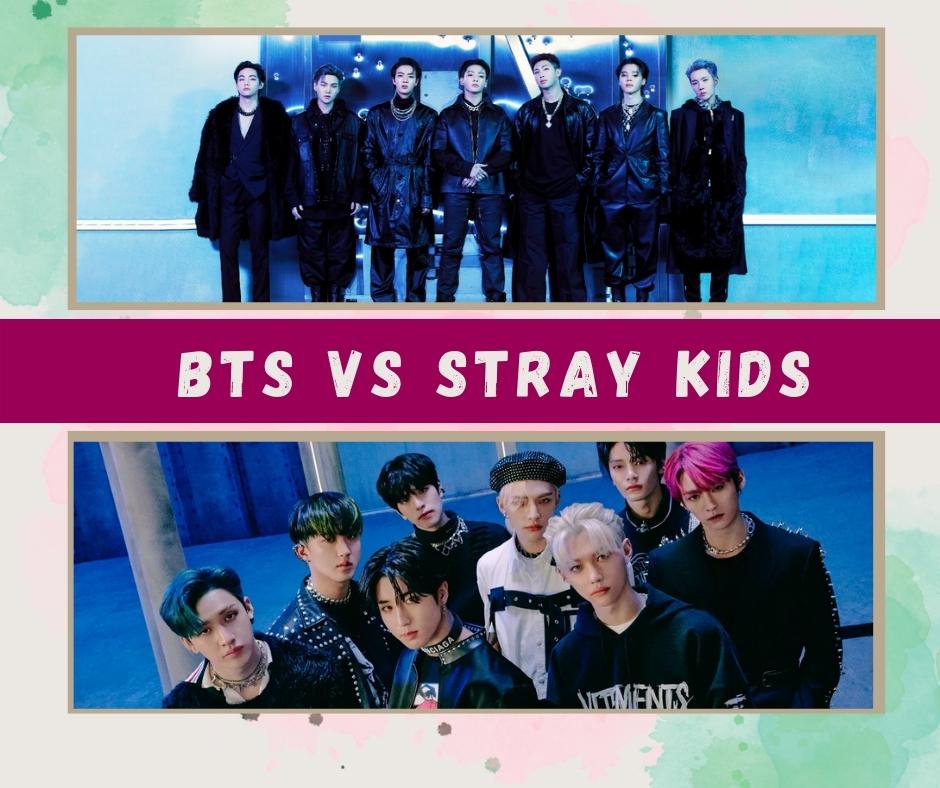 The universally acknowledged K-pop band, BTS or Bangtan Boys, is a seven- member boy band of South Korea. They debuted under the Big Hit Entertainment in 2013 by releasing their first single album named ‘2 Cool 4 SKool’.

Soon, they have earned enormous popularity, love, and respect all across the world.

On the other hand, Stray Kids is another popular K-pop group consisting of eight members. The title ‘Stray Kids’ refers to a group of lost children who have bigger dreams to accomplish and are striving to pave a path together towards excellence.

In 2017, the band was formed by JYP Entertainment through Mnet’s reality show. In 2018, they launched their pre-debut EP, ‘Mixtrap’. Finally, they made their official debut in the same year, under JYP Entertainment, with the EP called ‘I Am Not’.

Since the debut of Stray Kids, the group has achieved huge success globally, breaking several records.

Here’s a table that attempts to establish a comparison between BTS and Stray Kids. We will find that both groups are extremely talented and have greatly progressed in their unique ways.

Yet, this table will help us to decide which group is more successful based on the following comparison metrics.

The table presents that both the bands are extremely hardworking and both of them have achieved huge success. Both the bands are incredibly talented with amazing vocal lines, songwriting, and music production.

However, there are major differences between them which let us decide which group is better, BTS or Stray Kids. If we judge them based on certain factors, it comes down to personal preferences.

But, if we try to come out with a decision considering all the factors, BTS is the band that stands as the ultimate winner. It is quite unlikely that any K-pop group can match the level of success and popularity of BTS.

To delve deep into this interesting comparison between BTS and Stray Kids, continue reading the following section of this article.

Who is more popular, BTS or Stray Kids?

It’s no surprise that BTS is more popular than Stray Kids. Both BTS and Stray Kids have proved their popularity internationally.

You might be wondering what makes BTS so popular. Well, they have written songs in different languages, such as English, Korean and Japanese. This has helped them to attract fans at a wider range.

Moreover, despite their huge prosperity, they have managed to remain quite ordinary and down to earth. They are very humble when it comes to interacting with their fans.

BTS members have used their stardom to make several donations and to inspire people to live better lives by finding self- love.

In 2017, they have also participated in the UNICEF # END violence campaign to ensure protection of people from violence. There are several factors in BTS that have made BTS end up winning the hearts of millions of fans.

Which K-pop band has better music, BTS or Stray Kids?

Generally, people prefer the lyrics and music composition of BTS more than Stray Kids. But, as the taste of music varies from person to person, your preference may differ.

Some K-pop enthusiasts appreciate the humor and funniest moments that Stray Kids gives through their performance. They have helped people to overcome hard times.

BTS remains extremely diverse in their lyrics and music composition. They take up serious issues like depression, anxiety, problems in accepting oneself and finding self-love, and social issues of the age.

By conveying emotions through their music, they have immensely influenced people.

Which team wins at rapping, BTS or Stray Kids?

BTS is phenomenal when it comes to rapping and they are of course better than Stray Kids. That doesn’t mean that Stray Kids are poor at rapping. Han and Changbin among the Stray Kids have a very strong rap line.

However, they are not as fabulous as Namjoon, Yoongi, and Hobi of the BTS group. These three members of BTS have become the epitome of K-pop rapping.

Now, your preferences might differ in this respect. So, judging the two groups based on this factor is subjective.

Which K-pop band is better, BTS or Stray Kids?

BTS wins out by a mile when the group is compared to Stray Kids or any other K-pop group. Withstanding the tough competition in the K-pop industry, BTS laudably stands at the apex.

The BTS group has sold more albums, won more awards, and garnered a stronger fanbase all across the world than Stray Kids.

So, the winning trophy goes to BTS.

Who is more successful, BTS or Stray Kids?

There isn’t any doubt in declaring that BTS is more successful than Stray Kids. As of 2022, BTS is the biggest K-pop music sensation.

To beat BTS, Stray Kids have to beat the entire western industry which is pretty difficult for the band to achieve shortly.

BTS army is giving the team the maximum views in a music video within 24 hours and this has also made BTS receive social artist awards. To reach the level of BTS, Stray Kids need to make a stronger fandom.

BTS vs EXO
BTS vs Blackpink

Considering all the factors discussed in this article, we can conclude that it is BTS who becomes the ultimate winner, beating Stray Kids in various aspects.

However, it must be admitted that both the K-pop groups are extremely hard working and talented with technical proficiency, remarkable stage presence, performance consistency, self- composed lyrics, wonderful production, and appealing musicality.

So, let’s keep appreciating their labor and by supporting them and listening to their music, let’s imbibe positivity from them and spread enjoyment and love all around us.